The /s/ sound is a stream of air (fricative) sound. The /s/ is voiceless, in that the larynx does not vibrate as it does on its voiced partner, the /z/ sound. To produce a clear /s/ sound the tongue is raised high in the mouth to almost touch the alveolar ridge, the roof of the mouth.

The /s/ sound production is one of the most common speech sound errors. Many children at some stage in their speech and language development have difficulty producing the /s/ sound. Perhaps the most frequent /s/ sound error is the lisp.

This is where children extend their tongues too far forward on /s/ production and the tongue pushes through the gap between the front teeth. This is known as an interdental /s/. Inter is a prefix and refers to among or in the midst of, while dental refers to teeth.

The resultant sound error becomes the /th/ sound, or to use the correct IPA symbol, the /θ/ sound. 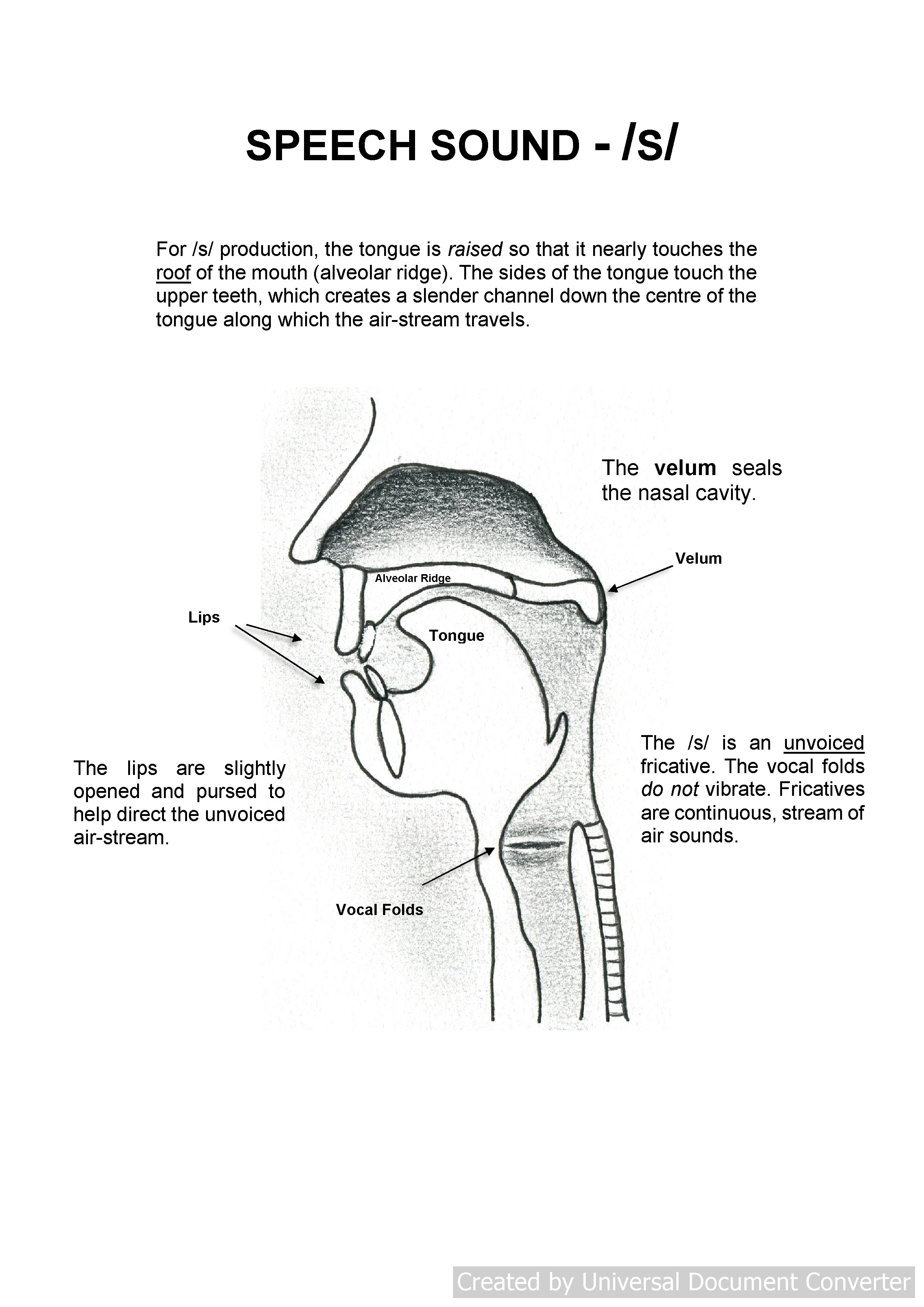 Speech Therapy S - How to Stimulate the /s/ Sound

Explain and model the following /s/ sound production techniques for your child.

Raise your tongue so that you can feel the upper teeth at the back of the mouth.

Open your lips a little to allow the air-stream to pass over the top of your tongue and through the lips.

Allow the air-stream to flow over the centre or the middle of the tongue. (Try not to use the term, blow. The term blow can be confusing to children who attempt to blow the air-stream which tends to change the structure of the mouth)

Don’t allow your tongue to protrude between the teeth. Allow the teeth to slightly touch if necessary to begin with. Try to keep the tongue be-hind your front teeth at all times. (This is particularly relevant for chil-dren with the  interdental /s/ production)

Speech Therapy S - Sculpting the /s/ from other Speech Sounds

Sound sculpting from the /ʃ/ sound

First, model the /ʃ/ sound for the child.

Next, instruct the child to smile, which prepares the lips for the /s/ sound and then direct the child using a model or mirror to point the tongue tip forward a tad.

Sculpt the /s/ sound from the /t/ sound.

Next, instruct the child to repeat the /t/ sound a number of times ttttttt. Model this sequence to the child.

Finally, after producing multiple repeats of /t/ tttttt, instruct the child to extend the final /t/ into a ssssss, the /s/ sound.

Sculpt the /s/ sound from the /n/ sound.

First, model the /n/ sound for the child. As with the /t/ sound, the /n/ sound is made by touching the tongue tip to the roof of the mouth just behind the top teeth (the alveolar ridge). The /n/ sound is a voiced nasal but can still be used to help sculpt the voiceless fricative /s/, which is very cool.

Next, sustain the /n/ sound for a few seconds. Note that the tongue is placed on the alveolar ridge and then released.

Instruct the child to release the tongue and produce a sustained /s/ sound. This is relatively easy to model and then produce. Once the /n/ sound completes, the voiced nasal will automatically transition to the unvoiced fricative /s/.

This page features speech intervention stages, from sound in isolation to word level.