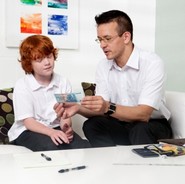 Speech Sound Errors: Speech production difficulties are the most common form of communication impairment school-based speech pathologists are likely to encounter when working in schools.


This page will briefly focus on the two most commonly diagnosed and treated speech disorders: articulation disorders and phonological disorders.


Omissions: Omissions of phonemes is when a child doesn't produce a sound in a word. An example of an omission would be a child who says 'ool' for 'pool.'


Substitutions: A very common speech sound error is the substitution. An example is 'thun' for 'sun.'


Distortions: Distortions are when a child uses a non-typical sound for a typically developing sound. One of the more common and difficult sound substitutions to treat is the lateral /s/, where the air escapes out of the side of the mouth during /s/ production, not over the center of the tongue. This results in a noisy or slushy quality to the /s/ sound.

A phonological speech disorder is present in the absence of structural or neurological problems and generally causes speech to become largely unintelligible to unfamiliar listeners. For instance, if a child with a phonological disorder was to say, 'On the weekend, I went to the beach,' the sentence may sound like 'On a eet en, I ent oo a bee.'


When young children attempt to imitate and learn adult speech they will use certain processes to help simplify some speech sounds. Children do this because their speech patterns are not yet at a mature level, therefore they will often substitute easier sounds for more difficult sounds.


These sound substitutions are known as phonological processes. Below are several of the more common processes that children will use when attempting to learn adult type speech. If you're a school teacher or pre-school teacher you may have met children who produce these processes.


Cluster Reduction: This process occurs on words which feature consonant sounds that are grouped together. For instance, the words snake and snail both feature the consonant cluster sn. In a cluster reduction snake and snail are commonly misarticulated as nake and nail. The /s/ at the beginning of the word is deleted.


Final Consonant Deletion: As the process title suggests, the final consonant sound in a word is deleted. For instance the words sheep, duck and carrot may be produced as shee..., du... and carro... When a child has final consonant deletion he or she tends to delete just about all final consonants. So the sentence, 'The horse ate the carrot and the duck went for a swim,' may be presented by the child as 'The hor.. a... the carro... an... the du... wen... for a swi...'


Velar Fronting: Very common processes and speech sound errors seen in young boys and girls. Velar fronting occurs on production of the /k/ and /g/ phonemes. The /k/ and /g/ phonemes are made at the back of the mouth, when the tongue contacts the velum, which results in a blockage of the air stream. Children with velar fronting difficulty don't do this. Their tongue tip touches the front of the mouth to produce a /t/ or /d/. For instance, cart becomes tart, and goat becomes doat.


Liquid Glides: A very common process where the liquid sounds /l/ and /r/ are replaced by /w/ or /y/. For instance, leaf becomes weaf or yeaf, and red becomes wed or yed. Liquid glides are later developing sounds and so are not really considered speech sound errors in younger children, but more as a natural process.

Please click on the links to access information on how to elicit speech sounds for common speech sound errors.

[?]Subscribe To This Site
© David Newmonic Language Resources 2013 - 2016. All Rights Reserved. Some Colonials (U.S citizens) may notice that the spelling on this site is odd at times. That's because I spell using the Queen's english, old chap, i.e. favor becomes favour.