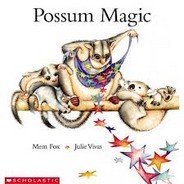 Grandma Poss and little Hush are two possums who live in the Australian bush. Grandma Poss is special in that she practises bush magic and has the ability to make Hush invisible. Hush finds being invisible a great thing because she gets to slide down kangaroos and  avoid nasty predators.

But there comes a time when Hush tires of being invisible and wishes to be visible again. Grandma Poss doesn't know the spell for making Hush visible again but she knows it has something to do with fodd, not possum food but people food.

So begins a quest as Grandma Possum and Hush cross the Australian countryside in search of specific Aussie food that will make Hush visible again. Their journey begins in Adelaide, traverses the country and ends in Tasmania. Along the way they sample a variety of classic 'Australian' foods that have become endearing parts of Aussie culture.

Possum Magic is a classic story from the early eighties that is still very popular to this day. The book is celebrating its 30th anniversary in 2013. The book continues to endure because the story is so good. Part of the attraction for clinicians, who may wish to use the book for language intervention, is the concise use of language and the effortless way the text is merged with the illustrations. An example can be found on a stunning two page spread of a truly scary looking snake sliding toward the viewer. Hush, who is thankfully invisible, clings by his tail to a very thin branch as the snake slides just beneath her. The text reads 'because she couldn't be seen she was safe from snakes.'  I would add that Hush was only just barely safe. This makes for a wonderful discussion about being invisible and why Hush looks so scared, etc.

Apparently older editions of Possum Magic feature a map of Australia with place names. The edition I reviewed didn't have this feature. In this case, I would recommend that teachers have a map of Australia or an Atlas by their side as they read the book to children because comprehension of the story will certainly be enhanced by a visual reference.

Possum Magic is recommended for children 5 - 8 years of age.﻿