Speech Intervention Sequence: This page is a continuation of traditional articulation therapy. If you have yet to read that page please click on the link and read the opening speech therapy sequence.

Phonetic placement is a popular method of unearthing new and correct speech sounds in young children. Essentially the clinician demonstrates how to correctly place the tongue, teeth and lips – the articulators, in order to produce the correct speech sound. Once your child is confident in articulating the target sound at individual sound level, probe sound with vowel combinations and then move on onto the next level of the speech intervention sequence.

The speech intervention sequence highlighted on this page is an example of traditional articulation therapy. The techniques can be useful for experienced clinicians.

It is recommended that parents and teachers speak to their local speech therapists or contact professional associations such as ASHA (U.S), SPA (Aus) or RCSLT (UK) for the right information about speech therapy options for your child with speech errors.

Once your child can discriminate between the error sound and target sound, therapy can progress to the child being taught to produce the correct target sound in isolation. The teaching of any new speech sound relies on the child imitating the correct model first produced by the clinician.

For instance, the clinician may say, “Peter, I’m happy for you to try the new sound, the /k/ sound.’ At this point the clinician demonstrates the correct sound. The /k/ sound is often fronted by young children. That is the /k/ phoneme is mis-articulated as a /t/, so car becomes tar.

The clinician models the correct sound and explains tongue position. For instance, ‘We produce the /k/ sound by pushing our tongue to the back of the throat. The tongue blocks off the air-stream and a build-up of pressure takes place. We then release the tongue and the air escapes rapidly, like a small explosion.’

This is quite complex information and can be reinforced with gesture and images to demonstrate where the tongue is located during /k production.

The child attempts the sound. The child will need to be prompted when an error has occurred and also when the attempted sound is correct. The clinician models and shapes the sound until the target sound has been established. At no point should the child be put under undue pressure or stress.

The nonsense syllable is a useful stage in the speech intervention sequence because it will allow your child to practice the new phoneme in a variety of phonetic contexts. The advantage here is that the new sound can be practiced without the danger of your child succumbing to the long established sound error. The established sound error habit often occurs when a child attempts the new sound in familiar words too quickly.

Nonsense syllables contain the target consonant sound plus a vowel. The target sound is practiced with the vowel in different positions. So for a target sound such as /k/ we may trial…

In the part of the speech intervention sequence produce the target sound with the vowel and have your child copy your model. If your child has difficulty producing the sound + vowel you may need to separate the target sound and vowel. This may occur because the established sound error attempts to intrude. For the /k/ phoneme this may sound like this: kee becomes ktee or kdee.

In our example here, the established sound error isn’t quite ready to release its hold. On a purely physiological level, the voiced stopping process /d/ has a strong neural connection to your child’s production of the voiceless velar /k/. So our goal is to replace the old neural map /d/ with the new neural map /k/. When this error pattern occurs it is important to address it. 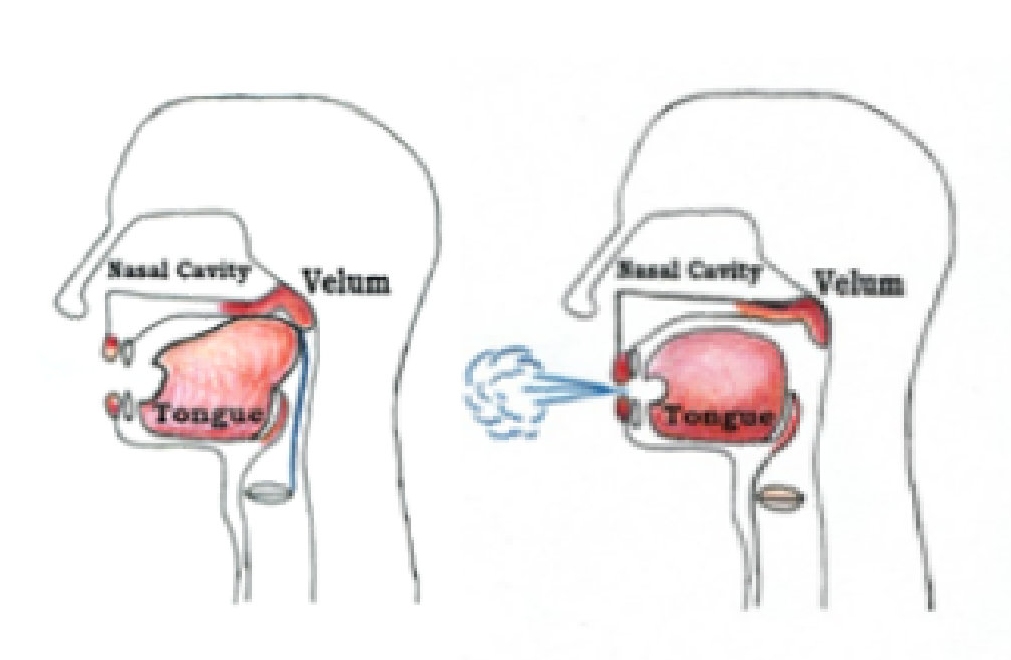 The image here demonstrates, in an artificial sense, that the /k/ sound is a build-up of pressure with the air-stream blocked by the tongue. The tongue is then released and the air-stream propels forward in an explosive burst.

The next important step in traditional speech therapy can now be attempted. Once your child is comfortable and confident at producing the target consonant in initial, medial and final positions with consonant/vowel combinations, move to speech intervention at word level.

It’s important to acknowledge that your child may have been using the speech error in literally thousands of words and statements over the years. It may take a while, and often does, for your child to consistently produce the target sound in words and sentences. Patience and persistence is a key here.

Your child has an excellent chance of succeeding at word level in the speech intervention sequence because of the foundational work that he/she has been doing at sound and syllable level, but it may take some time yet. Use a word sheet with pictures of the sound in initial position. For instance, for the phoneme /k/ the word list might contain words such as cat, kit, cart, kite, etc.

Present a card of one of the words (kit) and say, ‘This word starts with the /k/ sound. The word is the CVC word, kit. Now, you try.’ If your child is able to produce a clear /k/ at word level at this early stage, fantastic! You can move and practice the other /k/ initial words.

If your child produces, for instance, ‘ktit’ then you need to use the same principle of intervention as was introduced at syllable level: create a short gap between the target sound and the rest of the word. i.e. ‘k….it.’ (The /t/ and /d/ speech sounds here are examples of substitute sounds intruding at word level, but any number of other sounds may intrude)

The dreaded intruding phoneme will attempt to impose, but repeated practice and awareness of what your child’s articulators are doing can eventually overcome the error. If you model the word cat for instance and your child produces tat, then model the correct /k/ phoneme, which your child then repeats. Then say /k/ /a/, which again the child repeats, then say /k/ /a/ /t/.

When your child can produce the target sound at word level 80% and is able to self-correct, then we can move onto the target sound in phrases. Initially, the phrase should be short, no more than 2 word combinations. For instance, when producing the /k/ sound at phrase level try, ‘My cat, my car, his key, his kite,’ etc.

Once the child is producing short phrases confidently, attempt longer phrases with multiple combinations of the target sound. Be creative and slip in some target sounds that the child may not be aware of. For instance, ‘Say, the cool cat. Now say the cool cat’s car.’

Once your child can consistently produce the target sound in phrases, move onto sentence level using various levels of sentence complexity with multiple targets.  For our /k/ sound example, begin with simple sentences such as, ‘The key opened the door.’  Once your child is comfortable with simple sentences progress to slightly more complex constructions, such as ‘The cat ate the cat food,’ or ‘The cat ate the cat food while it sat in the car.’ Encourage your child to create his/her own sentences using the target sound.

Prompt conversations within structured games where the client’s speech is monitored for speech errors. For instance, while playing a board game as the child happily engages in the game, note when the correct target sound is produced correctly and praise your child.

If your child reverts to the error form during the game comment on the sound error and see if the child self-corrects. Provide praise to the child for all correct production of the target sound during an elicited conversation. There should be many instances during a board game where the target sound will be used spontaneously by your child.

For more information of speech intervention techniques, try some of these webpages...